Freemasonry is the oldest, largest and most widely recognized fraternal organization in the World. Founded in London, England in 1717, its current worldwide membership totals 3.6 million members, 1.6 million of which are in North America. With over 120,000 Masons and 530 local Lodges, Ohio has one of the largest Masonic memberships of any state in the country.

As a fraternal organization, Freemasonry unites men of good character who, though of different religious, ethnic, or social backgrounds, share a belief in the fatherhood of God and the brotherhood of mankind.

The traditions of Freemasonry are founded upon the building of King Solomon's Temple, and its fraternal ceremonies use the working tools of the stonemasons to symbolize moral lessons and truths. For example, Masons are reminded at Lodge to "meet upon the level of equality, act by the plumb of uprightness, and part upon the square of virtue."

Like most organizations, one will get out of Freemasonry what he is able to put into it. However, membership in Freemasonry is not meant in any way to interfere with an individual's commitment to his faith, family, or occupation. Freemasonry is not and never can be a replacement for these important institutions, but rather it is a positive environment that reminds every Mason of his duty to God, his community, his family and himself.

Freemasonry provides opportunities for sincere, honest, forthright men who believe in God and desire to contribute to the improvement of their communities and themselves. Through our Masonic Fraternalism, we reaffirm our dedication and unity to become involved citizens who have a strong desire to preserve the values that have made and continue to make America great. 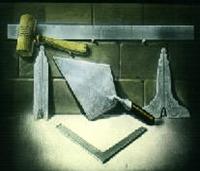 What are the Ceremonies?

The experience of becoming a member of a Masonic Lodge is divided into three ceremonial stages that Masons call "degrees." These three degrees are loosely based upon the journeyman system, which was used to educate Medieval craftsmen. Symbolically the degrees represent the three stages of human development: youth, manhood, and age.

The Fellow Craft degree is the second ceremony and exposes a Brother to more of the symbolism and philosophy of the fraternity. For skilled craftsmen this degree would have marked one's progress from an apprentice to a journeyman.

The Master Mason degree is the last of the Lodge ceremonies and with it a candidate becomes a full member, enjoying both the rights and responsibilities of membership.

During all three ceremonies, a candidate is treated with complete respect. At no time, is he ever made to feel uncomfortable or harassed in anyway. Masonic ceremonies are a wonderful tradition shared by men such as George Washington, Harry S. Truman, Dave Thomas, and other men of integrity. These ceremonies are always conferred in such a way as to bring pride to the candidate and the members of the Lodge.

Joining a Masonic Lodge and Becoming a Master Mason

Joining a Masonic Lodge is an opportunity for qualified men to become members of the world's oldest, largest, and best known fraternal organization. The process of becoming a member is divided into stages marked by three separate ceremonies, the symbolism of which is intended to strengthen a man's commitment to his Faith, his family, and his community.

Master Masons are men from a variety of ethnic, religious, and economic backgrounds who share a belief in the brotherhood of man and the fatherhood of God, work to improve themselves and their communities, and are an asset to all who know them. Membership in a Masonic Lodge is an honor that says a great deal about the character and personal integrity of a man.

Application for membership is open to men who:

If you meet the qualifications for membership (above), and have any questions regarding membership, you can contact the Lodge @ This email address is being protected from spambots. You need JavaScript enabled to view it.